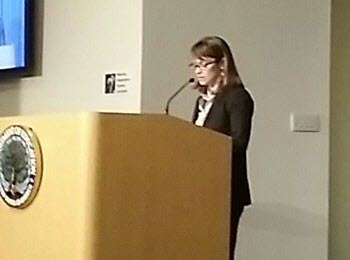 Today at a public hearing at the Department of Education, AFR’s senior policy analyst Alexis Goldstein gave testimony about the need to reinstate the Memorandum of Understanding with the CFPB, the important of the Borrower Defense and Gainful Employment regulations, and the need to urgently clear out the backlog of pending discharges for defrauded students.

Here is her testimony, as prepared for delivery:

“My name is Alexis Goldstein, and I’m Senior Policy Analyst at Americans for Financial Reform, a coalition of over 200 consumer, civil rights, labor, faith based, and business groups fighting for a safer and fairer economy.

As a coalition focused on protecting consumers, we are deeply concerned by the recent decision by the Department to end information sharing with the Consumer Financial Protection Bureau (CFPB) by terminating two memorandum of understanding. One of these MOUs was put in place to ensure coordination between the agencies so that students with complaints about private education or Federal student loans got the assistance they needed. Secretary DeVos also decided to end cooperation with the Bureau regarding the oversight of student financial services, such as supervision of loan servicers.

This move is a betrayal of students and a boon to loan servicers with a history of preying on those students. And it makes oversight more difficult and accountability harder to come by.

The Bureau has long been on the forefront of working to ensure servicers like Navient, who’ve illegally overcharged Americans, including members of the military, are held accountable; the Bureau sued Navient earlier this year for illegally steering struggling borrowers toward paying more than they had to on their loans. And past coordination between the Department of Education and the Consumer Bureau has helped to secure $480 million in relief for Corinthian students who were targeted with a predatory private loan program. DeVos’s decision to end cooperation with the Bureau is not just an abdication of responsibility, it’s yet another move that shows the Department choosing to act in the interests of big student loan servicers instead of students and borrowers. This action also defies Congress, as the complaint-sharing MOU was specifically required by Dodd-Frank.

In every major decision since the Trump Administration has taken over, the Department of Education has chosen to favor the interests of private companies ahead of the students the Department is entrusted with protecting. And no matter how loudly consumer, student and veterans groups sound the alarm, the Department continues to ignore the dangers.

The Department rescinded three memos meant to protect borrowers and ensure accountability, including one meant to guarantee that servicers that broke the law again and again weren’t rewarded with government contracts. The Department abandoned the victims of fraud at colleges by illegally delaying the update to the Borrower Defense rule, and creating two new negotiated rulemakings to re-do both the Borrower Defense and Gainful Employment rules — rules meant to prevent abuse and hold bad actors accountable. The Department has also hired multiple former employees of for-profit colleges, including Robert Eitel, who used to work for for-profit chain Bridgepoint, a chain that would benefit from all the degregulation advanced by the Department. It has also tapped former DeVry official Julian Schmoke Jr. to head the Department’s enforcement unit, despite his having no background in law enforcement or investigations.

Just last month, at the Republican Leadership Conference in Michigan, Secretary DeVos insulted defrauded students across the country with a comment about students raising their hands for “free money,” which ignores the devastation attending a school that does not educate you wreaks: ruined credit, wasted time, suffocating loans that impact all other areas of your life, including your ability to obtain other types of credit. With this comment, DeVos also misrepresented how difficult the Department has made it for the students defrauded by Corinthian, ITT and American Career Institute to obtain the discharges they are owed by law. Even today, tens of thousands of students are awaiting discharge, and some have had to sue the Department simply to stop wage garnishment, even as they are eligible for discharges.

The Department of Education’s actions under Secretary DeVos have a common theme: they all represent a betrayal of students and a boon to private companies with a history of preying on those students. The Department must stop relying on the advice of the private companies that make millions off students whether they succeed or not, and refocus their actions on defending the students they are entrusted with protecting. Anything less makes a mockery of the mission of his Department.”