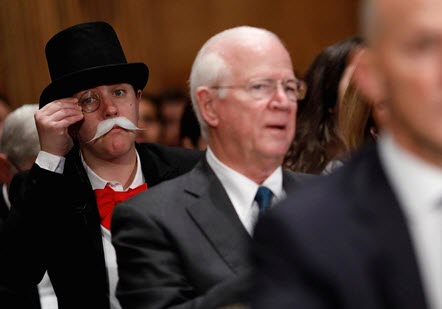 WASHINGTON, D.C. – Americans for Financial Reform and Public Citizen their allies are defending limits on forced arbitration from congressional attack with a delivery all 100 U.S. Senate offices: a mock “Get-Out-of-Jail-Free” card for the banks inspired by the board game Monopoly. An activist dressed as the billionaire Monopoly Man led the delivery.

The Senate leadership is pushing to roll back the U.S. Consumer Financial Protection Bureau’s arbitration rule using the Congressional Review Act’s (CRA) expedited process and has until early November to act. The rule allows consumers to join together in class actions to challenge wrongdoing in court. Widespread wrongdoing and negligence at Wells Fargo and Equifax and their attempts to evade legal accountability using forced arbitration “rip-off” clauses have transformed the issue from an obscure regulatory debate into a leading national story.

“The CFPB has restored people’s right to take Wall Street banks, payday lenders and other bad financial actors to court if they rip people off and break the law,” said Lisa Donner, executive director of Americans for Financial Reform. “Overturning it would be handing companies like Wells Fargo and Equifax a tall stack of get-out-of-jail-free cards – for use whenever they want.”

“Forced arbitration gives companies like Wells Fargo and Equifax a monopoly over our system of justice by blocking consumers’ access to the courts,” said Robert Weissman, president of Public Citizen. “The CRA resolution striking down the arbitration rule is a virtual get-out-of-jail-free card for companies engaged in financial scams. It should not pass go.”

“Make no mistake: Arbitration is a rigged game, one that the bank nearly always wins,” said Amanda Werner, arbitration campaign manager for Public Citizen and Americans for Financial Reform. “Shockingly, the average consumer forced to arbitrate with Wells Fargo was ordered to pay the bank nearly $11,000. Bank lobbyists and their allies in Congress are trying to overturn the CFPB’s rule so they can continue to rip off consumers with impunity.”

View images and videos of the Hill drop, the Monopoly man and the delivery. Images will be added throughout the day. To learn more about forced arbitration, visit NoRipoffClause.com. 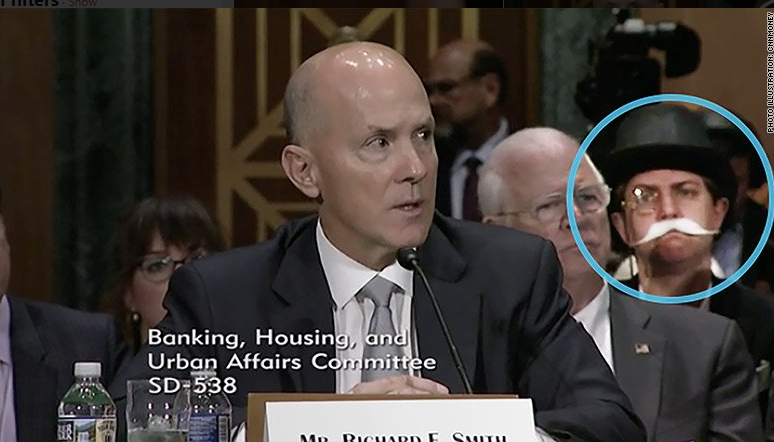