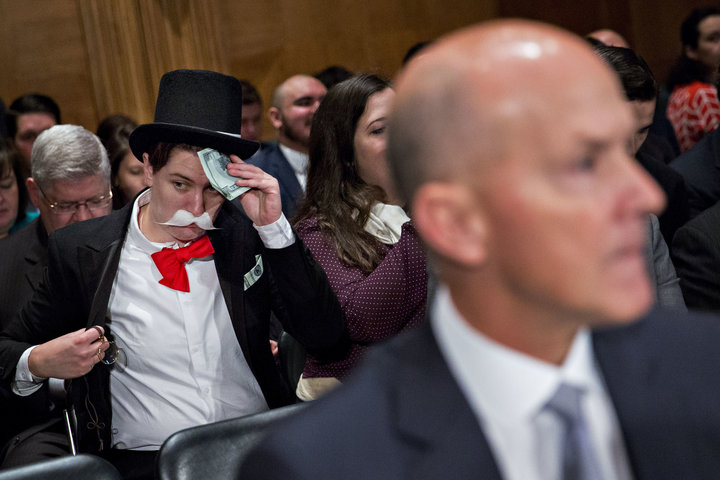 Americans for Financial Reform (AFR) and Public Citizen fought an attack on the new Consumer Bureau’s forced arbitration rule by delivering mock “Get-Out-of-Jail-Free” cards to the Senate, prior to the hearings with the former Equifax CEO.

The Consumer Financial Protection Bureau (CFPB)’s forced arbitration rule allows consumers to join together in class actions to challenge wrongdoing in court. Widespread wrongdoing and negligence at Equifax and Wells Fargo, and their attempts to evade legal accountability using forced arbitration “rip-off” clauses, have made it clear how important the CFPB’s new rule is. Unfortunately, the Senate has introduced S.J. Res 47 to block the Bureau’s rule. Americans for Financial Reform has a petition to the Senate, calling on them to reject the resolution.

Amanda Werner’s protest even made the Today Show!

TYT Politics interviewed Werner following the hearing, where she explained her protest to defend the CFPB’s rule and deny Equifax a “Get-Out-of-Jail-Free” card:

Senate leadership is pushing to roll back the U.S. Consumer Financial Protection Bureau’s arbitration rule using the Congressional Review Act’s expedited process and has until early November to act.

Amanda Werner’s presence in the Senate Banking Committee’s Equifax hearing was covered extensively in the press. Here is a sampling of the coverage:

The Monopoly Man even managed to follow ex-Equifax CEO Richard Smith to the elevators on his way out, furnishing a bag bursting with money: