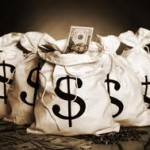 Congress will soon be back from recess – and back to gnashing its teeth over the budget and the various important things that, too many in that branch of government now assert, our country can no longer afford to do. One way to enlarge their sense of the possible: consider a source of revenue they have so far largely ignored – a small tax on sales of stocks, bonds, and complex financial instruments.

How small? Really, really small. A bill co-introduced by Sen. Tom Harkin, D-Iowa, and Rep. Peter DeFazio, D-Ore., calls for a tax of 0.03 percent – that’s 30 cents per $1,000. Yet even at that exceedingly modest level, a Wall Street speculation tax (also known as a financial transaction tax or FTT) would generate more than $350 billion over the coming decade, according to a non-partisan analysis of similar legislation introduced in 2012.

So we are talking about serious money, and a proven way to raise it. Similar taxes already exist in more than 30 countries, including the United Kingdom, South Korea, South Africa, India, Hong Kong and Brazil. Encouraged by their experience, France, Germany, Italy, Spain and seven other European countries are moving forward with plans to adopt a coordinated speculation tax.

It’s a tax – no getting around that. But it’s also a way to help close what amounts to a huge tax loophole. Americans pay sales taxes on all manner of goods and services. Wall Streeters don’t pay sales taxes when they buy and sell securities. That fact helps explain why the financial sector, which generates some 30 percent of the nation’s total corporate profits, pays only about 18 percent of corporate taxes.

Revenue and fairness aside, a speculation tax can be crafted to reduce short-term bets and market volatility, drawing resources out of empty financial gamesmanship and back into job-creating private and public investment. That would be a strong argument for such a tax even if federal tax rates were not at a half-century low and the country badly in need of revenue.

This unusual combination of benefits explains why Bill Gates, Warren Buffett, former Federal Deposit Insurance Corp. chair Sheila Bair and Vanguard founder John Bogle, among other business leaders and economists, have spoken up for the idea.

Lined up on the opposite side of the question, unsurprisingly, are the Financial Services Roundtable, the Securities Industry and Financial Markets Association and various other spokesgroups for the big banks and hedge funds. Not because of the impact on their own bottom lines, they are quick to insist. In the long Washington tradition of big fry hiding behind small fry, they tell us that the burden of a speculation tax would ultimately fall on investors, retirees, business owners and everyday folks.

But that’s a claim that wilts under the briefest scrutiny. People who use the financial markets to borrow, invest, save for retirement or manage risk would scarcely notice a 0.03 percent tax; they already pay far more in exchange fees, clearing fees, fund management fees and other costs built into the financial system. For someone purchasing $10,000 of stock, the tax would be all of $3. Even that bit of simple math overstates the impact, since the existence of such a tax would likely lead to less frequent trading. Dean Baker of the Center for Economic Policy and Research argues that most investors would “end up spending roughly the same – or even a lower – total amount on their trades.”

The industry’s other main line of argument – that a speculation tax would damage U.S. competitiveness and economic growth – runs aground on the successful experience of the U.K. and Hong Kong, two global giants of finance. It also collides with the fact that the United States itself had such a tax for much of the 20th century, with none of the dire consequences cited by today’s critics.

One subsector of modern finance – the high-frequency traders who buy and sell in a time frame of seconds or minutes – might face a serious competitiveness problem; but that would be a blessing for the country as a whole. Even a minuscule speculation tax could throw a monkey-wrench into their business model. But much of what high-frequency traders do amounts to little more than glorified front-running or insider trading, based on privileged knowledge of breaking market trends. When they get things wrong, they cause debacles like the “Flash Crash” of May 2010; when they get things right, they extract money from the real economy to no purpose other than their own enrichment.

The Wall Streeters have one compelling reason for opposing a speculation tax. They are battling against this idea out of an entirely reasonable concern that, once on the table, it will prove to be too attractive, and too sensible, for policymakers to resist.