Time is Right for a Financial Transaction Tax 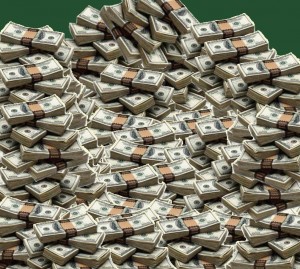 “It’s really profoundly immoral to talk about things like cutting Medicare when this policy measure sits in front of us,” AFL-CIO Director of Policy Damon Silvers told an audience of congressional staffers and others at a November 30 briefing on the financial transaction tax.

Lisa Donner, Executive Director of Americans for Financial Reform, moderated the event, which took place against a backdrop of intense debate over the so-called “fiscal cliff.” With federal tax rates at a half-century low and Washington hunting for revenue, a financial transaction tax needs to be “part of the conversation and on the table,” Donner said.

The briefing (see video) was sponsored by the Populist Caucus along with Senator Tom Harkin and Representative Peter DeFazio, co-authors of an FTT proposal that – as Jared Bernstein, former Chief Economist for Vice President Joe Biden and now a Senior Fellow at the Center on Budget and Policy Priorities, pointed out – would raise more than $350 billion over the next decade. That’s “far more money.” Silvers said, than “we are ever likely to get by taking medicine away from our grandparents,”

Basic fairness argues for such a tax, both in order to hold the financial sector responsible for a share of the damage it has inflicted on the economy, and as a way of bringing justice to what Silvers called a “deeply regressive and deeply unfair” system of asset transaction taxes. A.03 percent FTT, as Harkin and DeFazio propose, would be a modest levy, he explained, compared to the taxes that Americans up and down the economic ladder pay on transactions involving homes, cars, and other forms of physical property.

Equity and revenue aside, such a tax would promote “productive long-term investment” at a time when Wall Street and the biggest banks have “drifted away from this role,” said David Borris, who runs a catering company on Chicago’s North Shore in addition to serving on the executive committee of the Main Street Alliance, a progressive small-business group. That’s because, without significantly affecting traditional investment, an FTT would discourage some of the high-frequency algorithmic trading that often seems to drive today’s financial markets. Wallace Turbeville, a Senior Fellow at Demos and former Vice President of Goldman Sachs, noted that the average holding period for a share of stock has declined from four years (after World War Two), to two months (in 2008), to just 22 seconds (as of 2011). 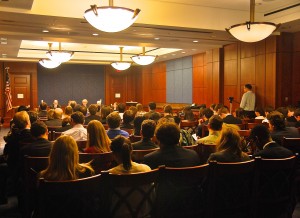 The explosive growth of high-frequency trading has kept the society at large from enjoying the benefits of modern financial-sector technology and quantitative analysis, Turbeville said. While per-transaction costs have fallen, the number of transactions and the volatility of the markets have increased sharply, he explained, allowing the financial sector to extract a greater and greater share of money from the real economy. Financial service companies now generate close to 30 percent of corporate America’s total profits – “up from 15 percent pre-deregulation,” Turbeville said. The sector’s share of GDP has also doubled, rising from slightly over four percent in the 1960s and ‘70s to about 8.2 percent today, while compensation has climbed to levels unseen since before the Great Depression. It all adds up to more than half a trillion dollars a year “being sucked into the financial sector,” as Turbeville put it, and “away from building factories [and] bridges” and other forms of private and public investment.

Opponents have portrayed the FTT as a threat to retirees and Mom and Pop investors. That’s a false claim, the speakers all agreed. “We’re talking about thirty cents on a thousand-dollar trade,” Bernstein pointed out. That’s a pittance compared to the exchange fees, clearing fees, and fund management fees already “built into the financial system,” Turbeville added. Borris said he had run the numbers for his catering company, concluding that a typical employee would pay about “a buck a year,” while Borris and his wife, as co-owners, would pay “less than $10 a year.”

Financial industry critics have warned that an FTT would drive transactions overseas. That argument doesn’t pack much punch, Bernstein said, with the European Union already moving toward an FTT and similar taxes in place in more than thirty countries around the world, including the financial centers of Hong King, Singapore, and the United Kingdom.

One of this tax’s important virtues is collectibility. Financial transactions, because they rely on contractual agreements among large and heavily regulated entities, “are about the easiest thing to track and enforce of any kind of tax,” Silvers said.