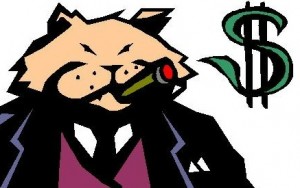 Public Citizen Calls for Reforms; More Than 20 Protests to Be Held Around Country

WASHINGTON, D.C. – The CEOs of 10 Wall Street firms that either failed or received taxpayer bailouts were paid an average of $28.9 million per year in the years leading up to the Wall Street meltdown, according to a Public Citizen report released today. Their average pay this decade, calculated through 2007, equaled 575 times the median American family’s 2007 income.

Fat cat compensation has nothing to do with good corporate performance, Public Citizen President Robert Weissman said. These CEOs were exorbitantly compensated for driving their companies off the cliff. At a minimum, Congress must ensure that corporate leaders are paid for long-term performance, not short-term illusions.

Public Citizen also has called for a windfall bonus and profits tax to be imposed on Wall Street.

Public Citizens report is being released in conjunction with a series of protests organized by members of the Americans for Financial Reform coalition against the enormous bonuses that Wall Street firms plan to lavish on their employees in 2009, just one year after the firms were rescued by taxpayers.

This week, Public Citizen will join its partners in the Americans for Financial Reform coalition at demonstrations at banks in more than 20 cities across the country. Protesters will demand that Wall Street and big banks use their anticipated $150 billion compensation and bonus pool to help American families recover. Some protesters will be singing carols, such as Fleeced and Robbed (to the tune of Feliz Navidad) and Deck Their Halls. In Austin, Texas, the Its a Wonderful Life characters Mr. Potter and George Bailey will face off.

For more information about the demonstrations, go to https://ourfinancialsecurity.org/2009/12/demand-wall-street-use-150-billion-bonuses-to-help-families-recover/ .