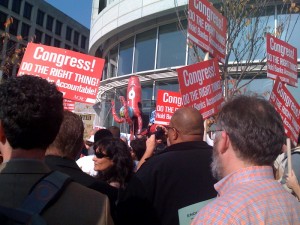 National People’s Action and Service Employees International Union (SEIU) organized hundreds of taxpayers to converge on the Washington headquarters of Goldman Sachs on November 16 to demand an end to multi-billion dollar bonuses and the Too Big To Fail Doctrine and call for immediate Congressional action on real financial reform.

Watch the slideshow above!

This is the latest in a national mobilization launched last month as 5,000 taxpayers from 20 states converged on the American Bankers Association convention in Chicago to demand Wall Street and big banks stop fighting reforms that will protect our families from the next crisis. As part of Monday’s event, Public Citizen released a report analyzing how much the bailed out banks and the financial sector is spending in Congress to block financial reform.