FACT SHEETS AND REPORTS: Big Banks Should Not Be Permitted to Pay Dividends in the Current Crisis

Over the last week big banks have committed to paying out some $13 billion in shareholder dividends.[1] Those first quarter dividend checks will go out in late April and early May, at the peak of a major economic crisis. If this level of dividends continues for the rest of 2020, big banks could be permitted to pay out over $50 billion in dividends for 2020. Collectively, in the first quarter of 2020 big banks actually paid out more than 100 percent of their income in dividends. These high dividend payments continue years of record bank capital distributions. In 2018 and 2019, the largest six banks alone paid out over $265 billion to shareholders.[2] 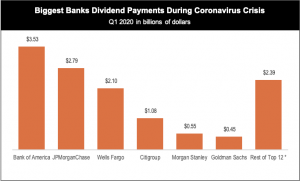 Dividend payments distribute capital to shareholders that could instead be used to support the economy during this crisis period. Every credit extension by banks — including forbearance on consumer loans during a period of unprecedented economic shutdowns — is supported either by private capital or by government support from the public. By permitting banks to pay out dividends, regulators are effectively allowing banks to transfer funds to wealthy shareholders and leaving the public purse to fill in the gaps.

Because of the need to preserve bank capital during a period of economic crisis, regulators in Europe and Asia have already required banks to cancel all capital distributions, including dividends.[3] However, U.S. banking regulators are permitting dividends to continue. They also have not stated whether they will allow banks to resume share buybacks, after banks announced a voluntary suspension of share buybacks for the second quarter of 2020.[4] In fact, U.S. banking regulators recently proposed a new rule that would have the effect of facilitating bank capital distributions during the crisis period.[5]

As Federal Reserve Bank of Minnesota President Neel Kashkari has said, dividends and share buybacks can always be raised once the storm has passed but underestimating the virus’s impact could force them to raise capital after they’ve already lost hundreds of billions.[6]

In light of the ongoing and unpredictable economic impacts of the pandemic, banks should themselves stop all capital distributions; if they are refusing to do so, U.S. regulators must take forceful action to require such a stop. Millions of Americans are requesting forbearance on loans which they have suddenly lost the means to repay, and corporations have drawn over $330 billion from their revolving credit lines with the banks to shore balance sheets ahead of difficult times.[7] But instead of using their capital to support this credit banks are paying a disproportionate amount out in dividends.