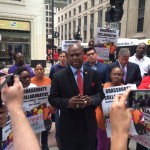 On Thursday, Grassroots Collaborative joined with organizations across the country including Americans for Financial Reform, CREDO Action, Rootstrikers and the Center for Popular Democracy to deliver a petition in which over 80,000 Americans asked the Securities and Exchange Commission (SEC) to investigate the toxic swap deals squeezing cities and states across the country.

The nearly 88,000 petitions were delivered to the SEC’s Chicago Regional Office. At the delivery, State Representatives Chris Welch and Robert Martwick were joined by Alderman Carlos Rosa. Also present were Saqib Bhatti of the ReFund America Project, and Erica Rangel of Ceasefire, Enlace Chicago. At the action, Representative Chris Welch said that Chicago need to “Stop robbing Sesame Street to pay Wall Street.”

These toxic swap deals contributed to budget shortfalls that led to schools closing in Chicago, water shutoffs in Baltimore, and devastating environmental and health issues in Los Angeles.  These same bad deals also helped lead to the bankruptcy of Jefferson County, Alabama and Detroit, Michigan.  The state of Illinois has already lost over $684 million to Wall Street banks on these deals and could be on the hook for an additional $870 million on November 27th if action is not taken.

In many cases, it appears that banks misrepresented the risk of these deals to cities, or omitted key information, in violation of fair dealing rules. The SEC has the power to order Wall Street to give back any ill-gotten gains if it finds evidence of wrongdoing. On Thursday, taxpayers and elected officials will ask them to do just that.

“These toxic swap deals have cost taxpayers across the country billions of dollars,” said Saqib Bhatti, Director of the ReFund America Project. “Because elected officials like Chicago Mayor Rahm Emanuel have refused to lift a finger to recoup losses, the SEC must act as the last line of defense to protect taxpayers’ interests so that we can fully fund services in our communities.”

“Predatory Wall Street deals are costing Chicago and other American cities billions of dollars,” said CREDO Political Director Murshed Zaheed. “It is long past time for the Securities and Exchange Commission to stop sitting on the sidelines and start protecting our communities from big banks.”

“In many places around the country, big banks appear to have violated their legal obligations of ‘fair dealing’ by overstating the benefits and understating the risks of deals that are now leaching billions of dollars from taxpayers and communities,” said Lisa Donner, Executive Director of Americans for Financial Reform. “The SEC should use their authority to investigate these deals, and to order disgorgement of ill-gotten gains if it finds evidence of wrongdoing.”

“The toxic swaps Wall Street peddled to our cities and towns are part of a parasitic business model that drains wealth from the real economy rather than creating value,” said Kurt Walters, campaign director of the Rootstrikers project at Demand Progress. “The SEC must launch an immediate investigation into how these toxic deals were pushed on our cities and towns – and force bankers responsible for fraudulent sales to return all ill-gotten profits back to the public.”

The petition signatures come from: