AFR Decries US Chamber of Commerce for Fronting for Wall St 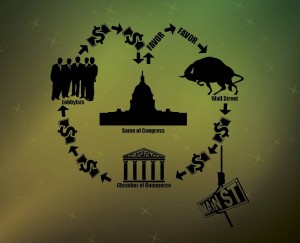 Washington, DC – Americans for Financial Reform issued the following statement around the U.S. Chamber of Commerce’s supposed “jobs summit” today. For more details on the Chambers motives, see the Washington Monthly article, “Show Him the Money” (excerpts below)

Heather Booth, Director, Americans for Financial Reform: “The U.S. Chamber of Commerce claims that holding Wall Street accountable for costing the country 8 million jobs will hurt businesses and job growth. But we remember how things went when we tried it their way for 8 years, and we’re all aware of economic disaster those policies created. Of course attempts to kill accountability and transparency for the financial sector should come as no surprised given who’s really pulling the strings for the Chamber – Wall Street.”

“Time after time, Wall Street has dictated the Chambers moves and messages – from spending millions on paid advertising to sending mobs of lobbyists to the Hill with the goal of killing reform. Big Banks might line the Chamber’s deep pockets, but the hoards lobbyists and fancy summits will not restore stability to our economy. This Wall Street reform bill will, providing consumers and small businesses a stable financial environment and predictable funding so they can thrive.”

Tagged with: Chamber of Commerce