“That [Committee for Truth in Politics] ad is confusing a lot of folks, because it’s not true.” – Sen. Jon Tester [Billings Gazette, 2/10/10]

Under the ironic cover of the “Committee for Truth in Politics,” defenders of the status quo are trying to preserve the massive bonuses and profits they rake in through greedy, reckless schemes and abusive credit card and mortgage lending.  But Sen. Jon Tester wasn’t fooled by these fabrications and stood up for the people of Montana. See script below for “Wall Street Puppets” which airs in Billings, Montana for the next week on broadcast outlets.

Tom McMahon, Acting Executive Director, Americans United for Change: “We want to lend our support to Senator Tester who is standing up against a mounting campaign to prevent meaningful efforts in Congress to crack down on abusive big bank practices. Montanans are not going to be taken in by a shadowy group that is out to protect the interests of greedy Wall Street CEO’s – a group that is even suing the Federal Election Commission to keep the source of their funding private. They call themselves a “Committee for Truth,” but, as independent fact checkers made clear, their attacks ads contain very little of it.”

Heather Booth, Executive Director, Americans for Financial Reform: “Financial reform is about fairness and accountability. Those critics who offer no solutions and want to continue the same failed policies are doing the bidding of the big banks, Wall Street, and CEOs who want more of the same — taxpayer funded bailouts, obscene bonuses, and policies that take advantage of families and small businesses. Sen. Tester recognizes this and has been out front, not only pushing for comprehensive reforms, including a strong independent Consumer Financial Protection Agency, but has also been instrumental in pushing back against these lies. We applaud his work and hope all Montanans will reach out and do the same.” 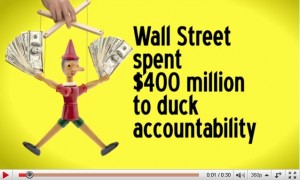