The Chamber of Commerce is descending upon Capitol Hill today, January 20, intending to kill financial reform. 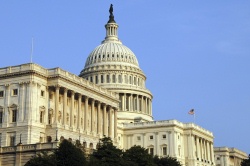 Today, a US Chamber of Commerce delegation will descend on Capitol Hill to tell you why you should oppose the proposed Consumer Financial Protection Agency (CFPA).  They will cloak their opposition in false claims about the CFPA’s impact on small business, but the Chamber’s opposition is really about the major financial services firms that we believe secretly bankroll the Chamber and its multi-million dollar campaign to defeat the CFPA.

Americans for Financial Reform urges you to reject the Chamber’s false rhetoric and to enthusiastically support the CFPA.  Like Chamber ads aimed at killing health care reform, which National Journal last week reported were secretly funded by the nation’s biggest health insurers, we believe the nation’s largest financial services firms are behind the Chamber’s multi-million dollar attack on the CFPA.

Firms like Bank of America, Citigroup, JP Morgan, Morgan Stanley, PNC Financial Services, and M&I Bank are the Chamber’s real constituency and they are among the Chamber members the CFPA would actually regulate.[1] These firms originated sub-prime mortgages, issued toxic securities and are among the largest credit card issuers and the most aggressive in driving up interest rates, fees, and hidden charges.  They also received over $140 billion in taxpayer support through TARP.

Americans for Financial Reform is a coalition of over 200 national, state and local consumer, labor, retiree, investor, community, business, and civil rights organizations who are campaigning for real reform in our nation’s financial system. We detail below why you should reject the Chamber’s bogus opposition and support a strong CFPA that will protect both ordinary consumers and small businesses from abusive financial products.

The U.S. Chamber under its longtime CEO Tom Donohue is not a credible voice for American business in general and small business in particular.

Even before National Journal dropped its bombshell, the Chamber’s credibility as a voice for American business was at an all-time low.  Recent revelations that the Chamber had wildly overstated the size of its membership and relies overwhelmingly on a few dozen companies for nearly half its budget debunked the myth that it represents small business.  The National Journal report confirmed that the Chamber acts as a lobbying gun-for-hire for powerful Chamber members in need of political cover, such as TARP banks and their executives.

As you may know, the Chamber recently revised its published membership numbers from 3 million to 300,000 after Mother Jones uncovered that it was playing games with its numbers.  But even the revised numbers are misleading, since the Chamber’s 25 largest contributors provided a staggering $54 million to the Chamber in 2008, accounting for 39 percent of its $140 million in total contributions.  One contributor gave the Chamber $15.3 million in 2008.  The Chamber has not disclosed any of the contributors’ names.

This lopsided fundraising has been made possible by what the Wall Street Journal in 2001 called Chamber President Tom Donohue’s “most striking innovation.”  By setting up separate accounts to fund projects on behalf of individual companies and industries, the Chamber allows members “to use the Chamber as a means of anonymously pursuing their own political ends.”

As National Journal exposed just last week, this is exactly what five of the nation’s largest health care providers have been doing.  Though publicly supporting President Obama’s health care reform efforts, Aetna, Cigna, Humana, UnitedHealth Group and Wellpoint secretly funneled $10 million to $20 million to the Chamber in the latter half of 2009 to fund ads aimed at killing health care reform.  The Chamber’s opposition to financial reform in general, and to the CFPA in particular, has all the hallmarks of this pay-to-play scheme.

The U.S. Chamber spends millions to scare small business with false attacks on the CFPA.

When the Chamber launched its “multi-million advertising and grassroots mobilization campaign” to defeat the CFPA in September 2009, Chamber executive David Hirschmann said, “We’ll spend whatever it takes. It’s a high priority for the Chamber.” The Chamber’s ads sought to scare small business owners into believing, falsely, that the CFPA would regulate any small business that offers credit, even the local butcher.

Lawrence Summers, Director of the President’s National Economic Council, called the Chamber’s scare ads “the financial regulatory equivalent to the death panel ads being run with respect to health care.”  After the House eliminated any doubt by explicitly exempting merchants, retailers and other non-financial businesses from CFPA oversight, the Chamber simply edited its ads to say the CFPA would hurt small business by restricting access to credit.

Having spent millions to spread lies about the CFPA and its authority to regulate small business, the Chamber is now urging you to reject it because it would “reduce consumer choice, stifle innovation and restrict access to credit.”  Once again the Chamber has it all wrong.  The CFPA will enhance informed choice by requiring disclosure that enables consumers to understand and compare the terms and conditions of financial products.  Informed choice is the predicate to competitive markets and to the innovation of new products that meet consumers’ real needs, rather than of new products that merely better conceal their true risks and costs.

Moreover, the ongoing unwillingness of Wall Street bankers to lend, despite trillions of dollars of taxpayer money provided to them through the bailout, is not the result of “the uncertainty in regulatory standards and increased liability” created by the recently proposed CFPA, as the Chamber asserts.  Rather, it is result of the banks’ uncertainty about their own balance sheets following years of excessive risk-taking and questionable lending practices that was made possible by the risky and incomprehensible consumer financial products they themselves created under a regime of inadequate and incoherent regulatory oversight.

In fact, far from fostering uncertainty in regulatory standards, the CFPA will finally consolidate and rationalize regulatory authority for consumer financial products that is now scattered among seven agencies.  This will prevent the regulatory arbitrage and lack of focus on core consumer protection concerns that has been the status quo for decades.  The new agency created by the CFPA will have the authority and expertise to comprehensively enforce existing regulations and create new ones that are smarter, simpler, cheaper, and more effective.

The U.S. Chamber is spending millions to kill legislation to regulate the products and practices that generated massive payouts to bank executives, but ultimately devastated their firms and caused the worst financial crisis since the Great Depression.  Last week, Chamber CEO Donohue even defended the huge bonuses being paid to the executives of the TARP banks who concocted the toxic mortgage securities and other complex derivatives at the root of the financial crisis.  He likened the executives to “mad scientists” whose brilliance justifies their outsized pay.[2]

We urge you not to allow the Chamber’s bogus campaign to succeed, and instead to support real financial reform, including a strong CFPA. The consolidation and strengthening of consumer protection in the financial services industry is essential both to rebuild our economy and to restore confidence in our financial markets. Moreover, you should insist that the Chamber cease providing cover for the largest and most reckless progenitors of the financial crisis and call on the Chamber to reveal who is funding its campaign against the CFPA.

Neither Congress nor the American public should have to accept the Chamber’s misleading and self-serving misrepresentations of its membership and their contributions.  We deserve to know who is really bankrolling this effort to keep a broken status quo in place.

[1] While the Chamber neither discloses its members nor their contributions, these six firms confirmed their Chamber membership in client surveys provided to a member of the AFR coalition.

[2] Billionaire investor Warren Buffett has similarly said complex financial derivatives were devised by “madmen.”  But that was in 2003, when he presciently warned that derivatives were “financial weapons of mass destruction” that could harm the whole economic system.

Tagged with: CFPB, Chamber of Commerce