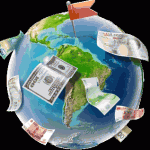 A tele-press conference on the cross-border application of Dodd-Frank derivatives reforms.

One of the centerpieces of the Dodd-Frank financial reform law of 2010 was an effort to bring rules of transparency and safety to the massive and previously unregulated derivatives markets, which had helped crash the U.S. economy in 2008-09.  That effort now faces a major threat. Wall Street banks, which have already won a delay in applying the Commodity Futures Trading Commission’s new rules to international swaps activity, are mounting an intense lobbying campaign, aided by foreign banks and regulators, to win additional exemptions for transactions conducted through overseas subsidiaries.

Such an exemption would amount to a huge loophole

Michael Greenberger: This would be a “loophole in Dodd-Frank that could sink the entire structure as it applies to over-the-counter derivatives or swaps” – a market whose failures are widely seen as having caused the financial meltdown. “[M]ost large financial institutions can by the stroke of a computer key conduct and execute swaps transactions outside the sovereign United States.”

Marcus Stanley: What may appear to be ”a backroom argument” about “boring technical details” really amounts to “an effort to snatch defeat from the jaws of victory in terms of derivatives regulation… This series of exemptions will start to unravel the whole structure of Dodd-Frank derivatives oversight.” Ostensibly temporary exemptions could “get cemented in place and eventually get made permanent.”

U.S. taxpayers would end up paying a heavy price

Michael Greenberger: “[N]obody’s paying attention to the [danger of the] American taxpayer being the party holding the bag if foreign subsidiaries of U.S. banks fail.” If they do, “those banks will be lining up again and making the argument if you don’t rescue us, the world economy will collapse. The U.S. taxpayer should not be put in a Hobson’s choice of either having to go through another multitrillion-dollar bailout… or face the next Great Depression.”

Wallace Turbeville: There’s a real danger that “foreign jurisdictions will get the business and we’ll get the risk.”

Dennis Kelleher: “If you strip away the pretext and the rhetoric, what the industry and its allies are arguing for is offshoring and outsourcing the protection of the American people from another financial collapse… [T]hat really is what’s at stake.”

Michael Greenberger: The biggest U.S. financial institutions already conduct half or more of their derivatives business through foreign subsidiaries. “Congress, being fully aware of the international problem that the lack of regulation created, passed an express provision, Section 722d… which made it clear that any swaps activity that has a ‘direct and significant connection with activities in, or effect on, commerce in the U.S.’ would be covered by the Dodd-Frank requirements.”

Wallace Turbeville: “A bank doesn’t care where a trader sits or where his computer connects into the worldwide web… [I]t doesn’t make a hair’s breadth of difference whether it’s in Dublin or New York, or whether it’s in Frankfurt, Germany, or Frankfort, Kentucky. That’s why it was very wise, when Dodd-Frank was drafted, that they didn’t talk about where corporations were located, or [about] the difference between subsidiaries and branches. What they talked about was the effect on the U.S. economy.”

Dennis Kelleher: “It’s also important to remember that the U.S. government and U.S. taxpayers stopped the last crisis and bailed out the global financial system. It wasn’t London or Brussels or Berlin. It was the United States… [T]hat isn’t to say no one else did anything, but the United States carried the load, and without the U.S. stopping that, the system would have collapsed. And it’s almost certainly likely to happen the same way next time.”

Laxer regulation would be the inevitable result

Wallace Turbeville: In the United Kingdom, where the financial sector plays a huge economic and political rule, there’s a “great incentive on the U.K. side to protect their banks.”  The U.K. is “more and more” in control of the European Union negotiating position on financial reform.

Marcus Stanley: “What we’re seeing is pressure to turn these exemption periods into an open-ended exemption that would essentially say that no one can regulate until everyone has regulated – that we slow down the pace of global regulation to whoever the slowest country in the world is.”

Dennis Kelleher: Overseas enforcement “has been abysmally bad.” U.K. regulators, for example, knew about the rigging of the LIBOR rate for years, “and did nothing.”

Strong derivatives reform will benefit our economy and U.S. banks

Marcus Stanley: In this “transitional period,” the U.S. should “have the courage to lead the way… to step out front and say, All right, the U.S. is the first country that has these rules. We’re going to put these rules in place. U.S. banks are going to follow these rules. Then we’re going to create pressure for other countries to come up to our level.” In the process, we “create a competitive advantage for the United States. Because U.S. banks have the most practice in this new derivatives regime, U.S. banks will be the safest and best regulated global Banks. And anybody who knows the financial markets can tell you right now that it is a competitive advantage to be perceived as backed by a very strong regulatory regime and a very stable country. That attracts business.”

The big banks are making a “strange argument, because “if it’s really true that there’s a ‘competitive disadvantage,’ what that’s saying is that other countries have laxer regulation of their derivatives markets…” But “if we believed that strong regulation of the derivatives markets didn’t bring enormous economic benefits, in terms of financial stability and taxpayer protection, then we wouldn’t have passed the Dodd-Frank Act in the first place.”

Listen to the teleconference (mp3)