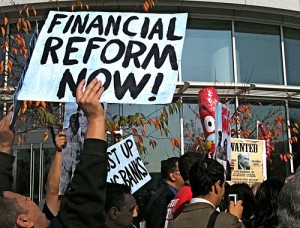 With the landmark passage of the Financial Reform Bill now a part of history, Heather Booth, director of Americans for Financial Reform, took the time to describe the ups and downs of the long-fought battle for reform in The Huffington Post. Here is an excerpt from that article:

Nearly two years after the reckless behavior of the Big Banks took our economy to the edge of the abyss and cost 8 million Americans their jobs, Congress has passed and sent to the President the most significant legislation to rein in Wall Street and the Big Banks since the Great Depression. These reforms will bring transparency and accountability to Wall Street, and protect consumers on Main Street.

The big lesson is that if we organize, we can win. The progress we made was because people raised our voices, took the message to the public, to the streets, and to the Halls of Congress, where we were joined in our efforts by some committed elected representatives.

The forces arrayed against us had overwhelming resources, and hundreds of billions of dollars at stake in protecting the status quo. But we proved that when we fight back, and stand together, we can win victories against even the biggest and best-funded opponents of change. The big banks spent $1.4 million dollars a day lobbying to kill reform and they did not succeed.

Click here to read the full article and a list of some of the highlights of the bill.