Congressman Maffei: We Need a CFPA 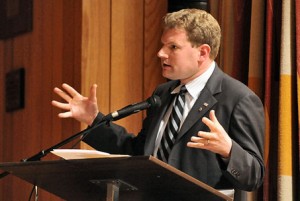 Congressman Dan Meffei (D-NY) recently spoke up on behalf of the Consumer Financial Protection Agency and increased consumer protections in a radio interview with the Rochester-based station WXXI.  The report from the interview says:

Maffei was in Rochester earlier this week, to promote new rules for credit card companies, which go into effect on February 22. But to really protect consumers, Maffei says there needs to be something akin to a Food and Drug Administration, but for debit cards and mortgages and other financial products.

Ruhi Maker with the Empire Justice Center (an AFR coalition member) was also interviewed in this segment, and she said:

“The economy is nimble, and it should be nimble. That is the good piece of a capitalist economy that new products come up all the time, but some of those new products can be hurtful. And as we all know, legislation takes a very long time, and we know once you have a piece of legislation you’re not going to go back next year and say ‘hey they’re doing this, let’s change it’. Because that’s not gonna happen. That’s why you need a consumer protection agency that’s there, that’s in touch with the consumers.”

Click here to read the full report and listen to the radio segment.