All Tricks, No Treats 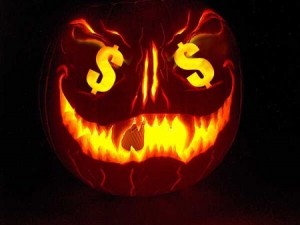 The banks are going door-to-door but only handing out tricks — no treats.

Banks are spending MILLIONS to defeat good financial reform that would prevent a future meltdown and help everyday people.  Enough is Enough!

Since December 2007, the American people have seen 7.6 million jobs lost and trillions in retirement savings wiped out.  There have been almost 2 million foreclosures so far this year – that translates into one family losing their home every 13 seconds!  Over the last three years, the average homeowner has lost $110,000 in the value of his/her home as a result of the crisis.  Another 2.4 million homes are expected to fall into foreclosure in 2010.

Meanwhile, the nation’s largest banks are raking in billions in profits (overdraft fees alone bring in billions) and awarding millions in bonuses.  In 2009 alone — Wells Fargo has made a profit of $9.3 billion.  Goldman Sachs plans to give executives more than $20 billion in bonuses.  The top six banks are on pace to pay out a record $149 BILLION in bonuses and compensation this year.  They posted nearly $30 billion in profits in the first half of 2009 by raising fees and interest rates and making risky bets with taxpayer dollars.

But the tricks don’t stop there!  Big banks are using bailout money to lobby against the creation of the Consumer Financial Protection Agency and regulation that would prevent them from using our economy like a casino.

Call your Member of Congress today – tell them to support the Consumer Financial Protection Agency and strong regulation that helps Main Street get back on its feet.