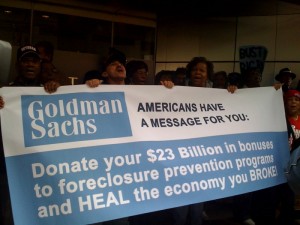 To Participate in 5k + Rally In Chicago

As Congress continues to debate financial reform, and following the 100th bank failure this weekend, Americans for Financial Reform (AFR) will participate in the largest taxpayer mobilization since the economic crisis began. The main event will happen tomorrow in Chicago where more than five thousand Americans from 20 cities will converge on the American Bankers Association (ABA) conference to demand banks stop spending millions in taxpayer dollars to lobby against reforms that would protect Americans from the next economic crisis.

In addition to the “Showdown in Chicago”, Americans for Reform will hold echo events on Wall Street and in Boston, MA, Orlando, FL, Cincinnati, OH, Wilmington, DE,  Indianapolis, IN, Lansing MI, and Missoula MT.

From New York to Missoula, ordinary Americans who have lost their jobs, their homes, and their life savings will be demanding banks end their overreliance on deceptive practices that gauge consumers and threaten/undermine the stability of our economy.”